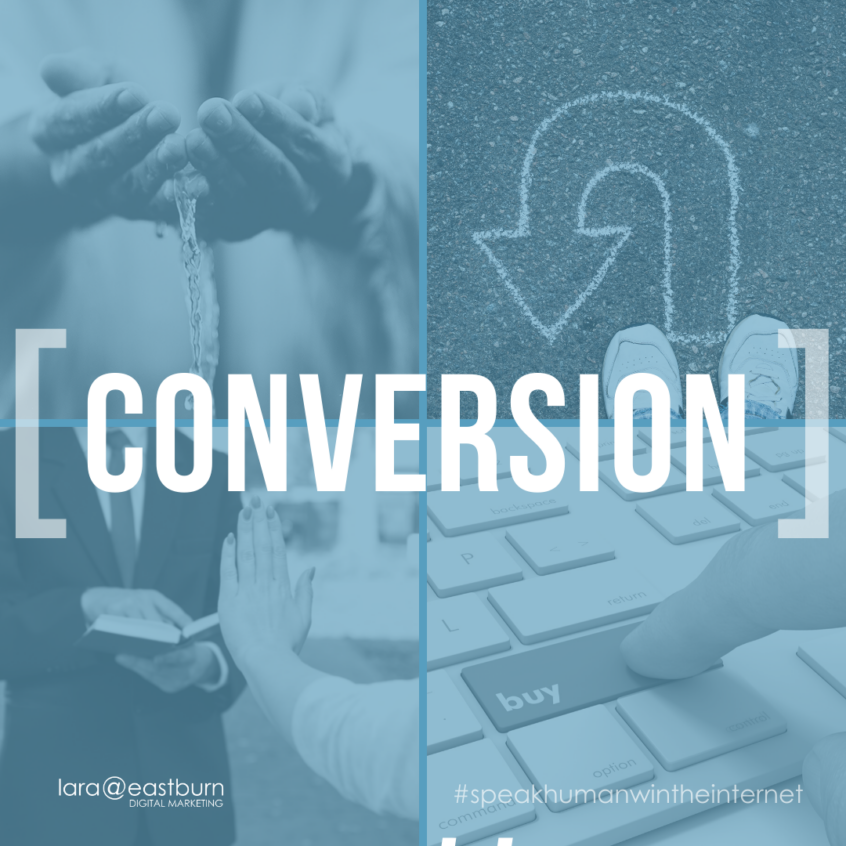 Here’s a word that shows up to the marketing and business party with more than its fair share of baggage.

It arrives in written English in 1340 and is already fully infused with religion. Conversion is – from the very beginning – a Christian word.

But let’s rewind a tad. Because its Latin linguistic grandparents – Vertere (to turn around) and Con– (with) – have a lot to tell us about what it means when we use it today.

Think of the vertere part as an ancestor – the grandaddy. In its sense of to turn around, it can either mean to ‘change direction’ or to ‘revolve.’

Like a proper Roman god, ol’ Grandaddy Vertere gets around, sowing all kinds of linguistic oats. It creates lots of descendants – each through a union with a different prefix. Like universe (revolving together), pervert (to turn the wrong way), and even advert (to redirect attention).

Convert, though, will mean to turn around WITH from the get-go. It means to change direction to join with the majority (the accepted, the ‘right way.’). In the cultural & historical climate in which the word arises, that majority is Christian.

‘Conversion,’ then, arises as a word that reflects the actions of adhering to the religion’s prevalent teachings of the time. It is, initially, a signifier of EXTERNAL behavior.

But because religious conversion is meant to also affect an INTERNAL transformation, we quickly see another meaning arise in English. This, one that indicates a metamorphosis in MATTER (liquid converts to gas, for example). Or the translation of one illegible unit to one that can be used/understood by a majority (converting Fahrenheit to Celsius, or currency exchange).

SO as the word ‘conversion’ moves into the realms of science – and finance – it dons a new, modern suit of clothes. Now, outside of colonization and church, the word generally means turning one thing into another – physically or materially.

OK. With that little history lesson under our belts, then, what do we mean when we say CONVERT in business?

I don’t see any reason to hedge here. When today’s marketers use the word ‘convert,’ it STILL means to turn a non-follower into a follower. It just does. (And yes, follower still literally means disciple).

It means to turn a non-subscriber into a subscriber. A potential buyer into a buyer. It means to change direction to come with me. To follow me.

And it is something we MEASURE.
Yeah, you know your conversion rate – or want to.

Nothing heinous there. A ‘conversion rate’ tells me if what I create matters to people. I need to know that.

I want to know if what I’m saying is bridging that awe-ful gap.

The question, then, becomes the METHOD of conversion.

And throws us squarely back into the violent history of this word.
Because the baggage ‘conversion’ brings with it across centuries is consistently that of coercion. Forced conversion.

Convert or die. Or in today’s business terms, ‘convert or fail.’ Follow me or squander. Poke at pain points. I have the secret. Here is the solution. All else is folly.

Which is just … well … SHIT. And shitty.

But our language doesn’t give me a word for that. When you signed up for this email list, that was technically counted as a ‘conversion.’ If you opened this email, that was another micro-conversion. If you end up being a client for ads or words that matter, even sweeter.

In-house, though, I call this ‘The Dig-It List.’ Because you’re thinking about words, you’re my humans.

I’m content with conversion-as-a-metric. And I use it because it’s the only-word-language-gives-me-right-now.

But it’s not the word I want.