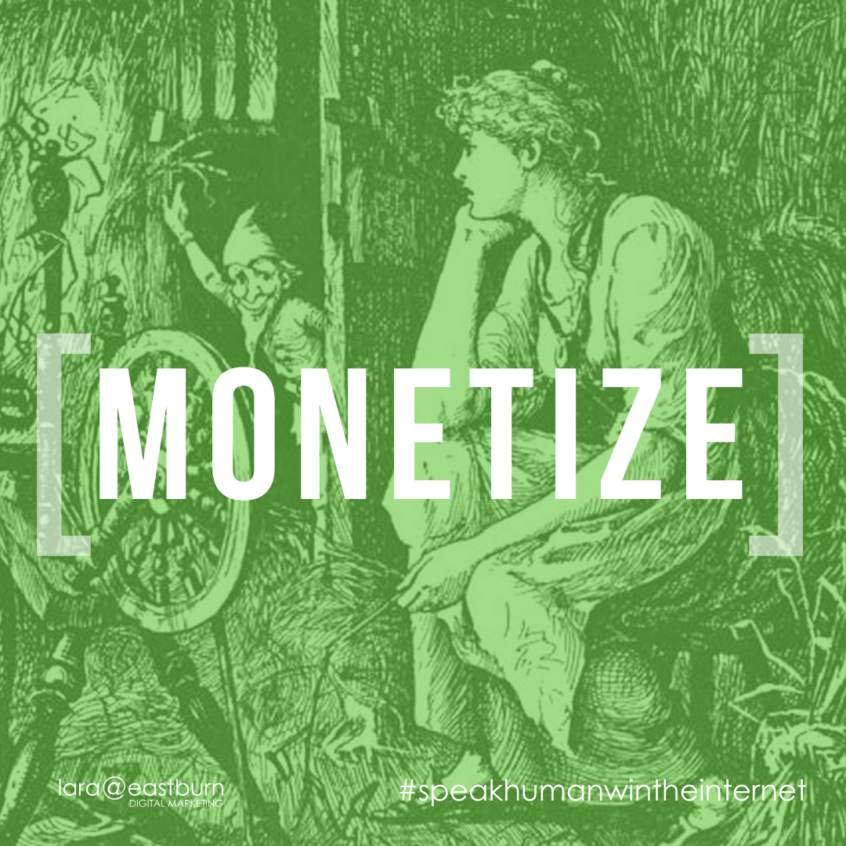 Here’s a word that has always irked me a tad.
In a marginally grating way, like a dripping faucet.

I don’t hate it, exactly. I know (mostly) what it means.
I get the gist. But there’s something about it that doesn’t sit quite right in my ears – or in my mouth.

Nearly every potential ads client will, at some point, utter this word. Usually, they mean they’d like something-that-is-not-currently-generating-income to begin doing so. Fair enough. For many clients, that is the point of seeking out an ads specialist, after all.

It’s a necessary part of the conversation, but every time it comes up I can’t help but think of the fairy tale Rumpelstiltskin – of him spinning straw into gold.

Because we’re talking about what is essentially … alchemy. Turning one thing of value into another (potentially more valuable) thing.

MONETIZE is not etymologically complicated. The interesting bit about it is its suffix. This particular category of -ize words is performative. It means to transform, to make into something else. It changes, it makes.

Monetize isn’t a bad word. But it is a truly weird word when you think about the way we use it today. Because – like so many words quickly adopted for a digital world that exploded nearly overnight – it is borrowed.

Until the internet, “monetize” (from 1856) belonged exclusively to the realm of economics – where it refers to the system of creating an accepted measure of legal tender. US currency, you may remember, was once regulated by the “gold standard” (There’s ol’ Rumple again!).

Enter the explosion of the BLOG. As the sun dawns on the 2000s, the internet begins to create & sell tools to generate money from the popularity of these early personal websites.

The first time “monetize” is used this way is in the phrase “monetizing eyeballs.” And this, friends, is the moment that internet users are explicitly commodified.

Just like that, a new system of creating currency is born & the meaning of “monetize” is redefined. On the world wide web, it will now refer to “commercializing components of traditionally non-cash generating assets into additional sources of revenue.”

Which is a mouthful.

So we begin to say “monetize” for the same reasons we call “a complex web of linked gateways and routing systems to electronically deliver messages” … um, email.

But let’s focus in on the “traditionally non-cash generating assets” part. Because this redefinition literally opens the floodgates for what can be “monetized.”

So is monetize the “right” word for this phenomenon?
Well, I don’t know how else we’d say it. Even if it does grate a bit.

But I predict we won’t be saying it very long.

The days of using monetize in these ways are numbered because there is only so long that they will be considered “traditionally non-cash generating.” I mean … who creates content in a digital space today with no thought to how it might create income?

It’s already the new (gold) standard. And eventually, it will just sound downright ODD to say “monetize my […].”

Hell, for me, it already does.

P.S. In researching this one, I went deep into what the fairy tale Rumpelstiltskin means. These anthropologists believe it’s one of our oldest stories. And this one was my favorite take.